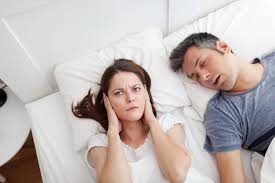 Exciting news! The Somnowell device will be featured in a new 90-minute TV documentary that airs on Channel 5 on January 6th at 9 pm.

The working title is "Britain's Biggest Snorers," and takes a humorous look at the phenomenon of snoring across the UK, says Firecracker Films, the production company.

The Somnowell device will be used to help cure a very bad snorer.

The show will unearth some of Britain’s loudest and biggest snorers with self-shot footage from desperate partners around the country. Already over 6,500 beleaguered Brits have contacted Firecracker Films to nominate a partner or loved one for the title, according to Firecracker Films.

The program will also explore the causes of and remedies for snoring with expert advice and facts for viewers to think about – while they’re trying to get to sleep.

A team of experts will set out to help those sufferers with some of the most pioneering and peculiar treatments around -- including the Somnowell.

The final 6 snorers and their partners will attend a revolutionary “snoring camp” where they will be filmed, monitored, tired and tested, in this quest to explore Britain’s largest (and loudest) taboo ailment.

The programme will culminate in the crowning of the nation’s least coveted prize: Britain’s Biggest Snorer.

Jes Wilkins, Chief Creative Officer, Firecracker Films, says “We want the nation to get behind this quest to find Britain’s loudest snorers. This 90-minute special promises to be both hilarious and genuinely revealing about the impact that snoring can have on health and on relationships. It is of course in no way inspired by the personal lives of either of the exec producers!!!”

As snoring is such an international plight, Britain’s Biggest Snorer will be distributed by Passion Distribution, also part of the Tinopolis group, and will be part of their slate of titles for MIPCOM 2019.

The Exec Producers for Firecracker are Jes Wilkins, Chief Creative Officer, and Fed Ruiz, Head Of Factual Entertainment. Series Producer is Helen Barker, and Seb Caldwell is the Commissioner for Channel 5.

The Somnowell Chrome is designed to gently hold the lower jaw and tongue in the 'recovery position' whilst you sleep and thereby keeping your airway open. This simple and effective treatment option has become the world's most popular solution for snoring.

There are a wide range of oral device designs available to treat snoring, from one-size fits all thermoplastic products through to mid-priced plastic devices.

The Somnowell Chrome is built to outlast all of these products. It is the only appliance made from a medical super alloy, incorporating exacting measurement standards and the highest level of expertise. Follow up studies of patients treated with the Somnowell Chrome reported a success rate of 91%.

The technology and medical expertise that go into creating each unique Somnowell Chrome deliver a treatment that is both highly effective and tailor-made for a perfect fit.